Blast Off into Space Day!

This week, Year 5 were treated to an amazing Space Day as part of their ongoing topic on space. 'Commander' Leyton came in with special headsets for each child and adult to wear so we could explore space together in 3D virtual reality. It was pretty amazing and quite believable as we took off in a rocket together, listening to the commentary. As someone who gets motion sickness I had to look away at points and soon realized that for a variety of reasons, I will never be an astronaut! Perhaps one of the children will be in the future though. 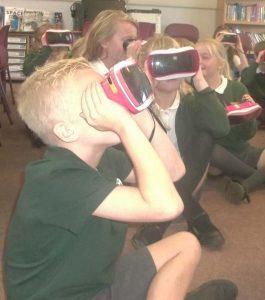 Before we took off however, Leyton helped to put the distances and travel times into perspective for us. When asked to guess how many miles it was to outer space, most of the children's guesses were in hundreds of thousands or even millions of miles. To discover space is actually 62 miles away and closer than London was a shock for us all. To then realise that the 45 minutes of a fast train to London is shortened to 115 seconds to get to space elicited quite a few wows!

It's really hard to explain how incredible the VR headset experience was as from the outside, the children are just sitting in their classroom but once the sets were on there were shouts of surprise and awe as each child really engaged with the experience that we were truly blasting off. You can see a little clip of the programme here but there really is nothing like the fully immersive experience!

Solar expedition is a Virtual reality workshop for kids in schools. The workshop includes a series of CGI films exploring interesting and unusual facts about...

"This day was amazing at school, can you believe we went into space! So we put the headsets on and… TAKE OFF! It was like a roller coaster going up and down."

"On our mission… first planet up is Mercury, the quickest planet to orbit the sun but the slowest to spin around. Named after the Roman god of travel and travelers, messenger of the gods. One side of this planet is cold and one side is hot. This is because Mercury has no atmosphere. Next up is Venus, the hell planet named for its heat and thick atmosphere which means it is not a place I would choose for my summer vacation. The brightest planet in the solar system, named after Venus the goddess of love… There are 5 dwarf planets in the solar system. Makemake, Eris, Pluto, Haumea and Ceres. they are smaller than usual planets."

"Today was amazing, I went into space! To start with we got in the spaceship and we took off. it was like a rollercoaster. When I looked next to me there was a control panel. Did you know it takes 115 seconds to get into space. It's only 62 miles. On our first mission we went to Mercury. It has more craters than any other planet in the solar system. One year on Mercury is only 88 days long! Mercury has no atmosphere so only half of it is warm. Second mission we went to Venus. Venus spins a different way to all the other planets and unlike Mercury it has too much atmosphere so it's too hot. Venus has lots of volcanoes that are probably extinct by now but we don’t know. Next we went to Mars. Mars is only half the size of Earth. Mars was named after the god of war because it is red. Mars once had lakes, rivers and even an ocean. Lastly we visited the whole solar system and saw what happened. It was great! This experience inspires me to want to learn more about space."